The Mystery of the Kingdom 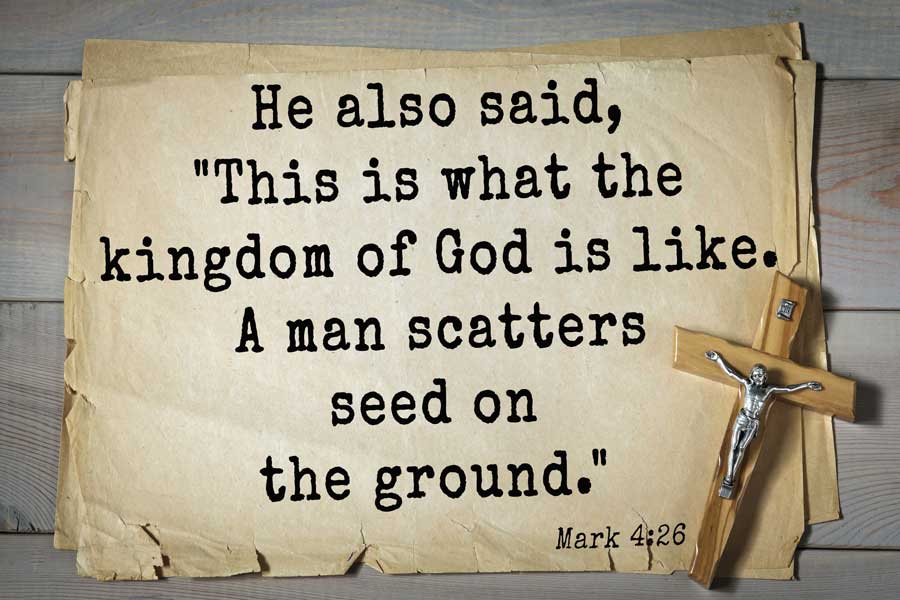 "Listen! A farmer went out to sow his seed. As he was scattering the seed, some fell along the path, and the birds came and ate it up. Some fell on rocky places, where it did not have much soil. It sprang up quickly, because the soil was shallow.

When he was alone, the Twelve and the others around him asked him about the parables. He told them, "The secret of the kingdom of God has been given to you. But to those on the outside everything is said in parables so that,

"'they may be ever seeing but never perceiving,
and ever hearing but never understanding;
otherwise they might turn and be forgiven!'"

It means something that is quite unintelligible to the person who has not been initiated into its meaning but is perfectly plain to the person who has been so initiated.
In New Testament times in the pagan world, one of the great features of popular religion was called the Mystery Religions.  These religions promised communion with and even actual identity with some god, whereby all the terrors of life and of death would be taken away.  Nearly all these Mystery Religions were based on the story of a god who had suffered and died and had risen again; they were nearly all in the nature of passion plays.
When the New Testament talks of the mystery of the Kingdom, it does not mean that the Kingdom is remote and abstruse and hard to understand;  It does mean that it is quite unintelligible to the person who has not given his heart to Jesus and that only the person who has taken Jesus as Master and Lord can understand what the Kingdom of God means.
One thing is crystal clear; it is that Jesus used parables - not to cloak his meaning and to hide His truth -  but to enable people to see it and to compel them to recognize it.

Jesus spoke His parables; He meant them to flash into the minds of people and to illuminate the truth of God.  This is not only for that time, so use His parables but along with them, apply your own comparisons relevant to today's world.

My Prayer And Praise

"Dear Father, I am so thankful for the parables that Jesus gave us.  It is so wonderful to be able to better understand the Bible as I read it.  Please open my understanding of the Scripture both the Old and the New Testament as I read it because I want to grow into being who You want me to be.  Amen."