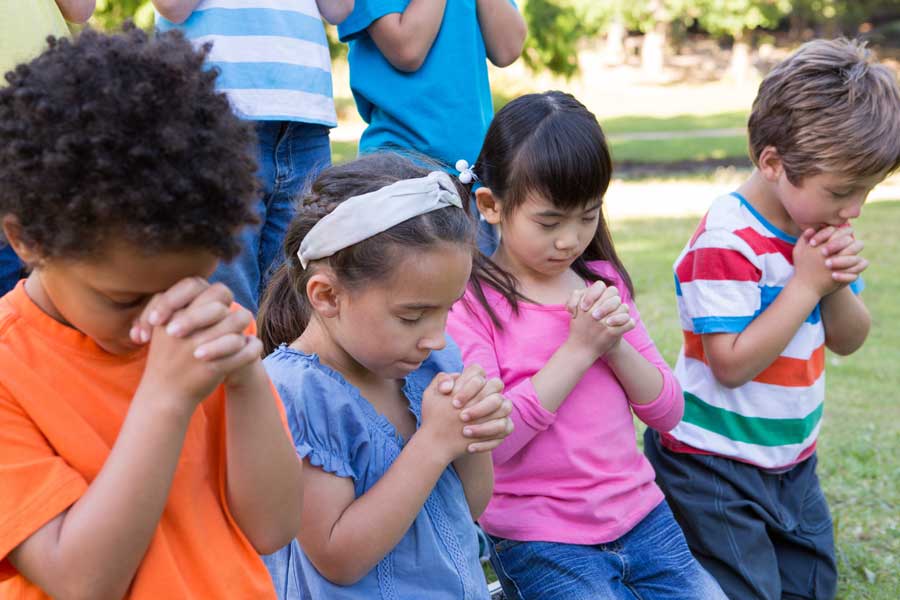 FORGET “NOW I LAY me down to sleep.”  A new breed of praying children – righteous seed – has emerged on the world scene.  World Christians. I call them “World Shapers.  “FORGET, TOO, THEIR so-called limited attention span. Their anointed, red-hot praying defies it.   They think nothing of spending hours at a time petitioning God and doing spiritual battle for their generation. They are indeed birthed by divine design “for such a time as this” (Esther 4:14). Can’t conjure up an apologetic on this one.  It would be irreverent to try, for it’s an inexplicable move of God.  I can only share my personal extraordinary 12-year journey with thousands of remarkable children, ages three to 14, whose prayers summon miracles.

FRANKLY, I’VE LEARNED more about praying just by listening to children’s no-frills prayers. Their collective pure heart invokes a dimension of power that adults don’t come by easily. I acknowledge, respect and, as Jesus admonishes, “make room for them” (Luke 18:16). Trying to describe this formidable host by showcasing a few herein is like drawing a black and white sketch compared to what they’re like en mass in living color. You’d have to be there!

EVEN JUST ONE quick listen to Zambia, Africa’s orphans with  HIV / AIDS as they passionately cry out to God for those like them around the world – that they themselves may be healed – would suffice.  Or, go back in time with me to Global Conference on Word Evangelism in Korea in 1995.  Forty intent children, prostrated in pinwheel fashion, arms linked, vehemently attacked the Ebola virus pandemic in Zaire after one child saw it in a vision.

Three days later, the World Health Organization sent out a media blitz headlined, “Ebola Virus in Zaire Arrested!” THEY SING OUR “House of Prayer March” and global mode kicks in. They toss around our fabulous Global! Prayer tool.  Hugging it, Michael prays, “Lord, I want all the Michaels (Michels, Miguels, etc.) in the world to know Jesus!” Intercession is activated like a natural reflex.  Or, take our Prayer Spinner. The arrow lands on “Abused and Hurting Children.” Seven-year-old Rebecca, teary-eyed, prays, “Dear God, please rescue all the 7-year-old girls who are treated bad.” Holy Spirit power ignites and the stronghold of violence is attacked.

CHILD REN’S PRAYERS are prophetic and/ or apostolic in nature. Our Children’s Global Prayer Movement’s hundreds of gatherings provide the litmus test. I need only explain to children basic roles of prophet and apostle and compare them with how they are already praying, i.e., Prophets declare the Word of God and future things.  When you pray propheric’ally you declare whatever Jesus desires and denounce whatever He doesn’t – present and future. Apostles are strong leaders. They never think “impossible.” When you pray apostolically you take authority in Jesus’ name, and you believe that with God everything is possible!

CHILDREN PRAY BIG.  They have big faith. Rather than dwell on issues, they focus on what God does as they pray. Declaring “Jesus is Lord!” or “Satan, the blood of Jesus is against you!” settles it. They can candidly describe what the Spirit shows or says to them. After being prepped (i.e_, clean hands, pure hearts, anointed with oil, etc.) they tackle each issue – some, with a holy vengeance, battling strongholds in Jesus’ name, others with on- their-faces weeping intercessions. Surely, God dispatched a myriad of angels to war on behalf of their petitions.

FOR CHILDREN TO be savvy about such matters is unsettling for some adults. However, given the opportunity, their talk will ‘reveal that most are very aware of life’s stark realities. Some are victims of broken homes or various types of abuses. In trying to shelter them, might we, in reality, be leaving them vulnerable?  Let them shout their own “Hosannas!” to silence their foe and avenger (Psalm 8:2)_To train, equip and liberate them to be praying conquerors ensures their hope and future.

CHILDREN WHO pray deeper, give self-evidence that God’s protective grace is upon them. After hours of non-stop praying, I’ll ask, “How do you feel?” Common responses range from good to happy to peaceful to satisfied to powerful to pumped. A gathering’s grand finale is celebrative – praising, dancing, singing, marching, thanking God for what He “got to do” because they got to do what they wanted to do.