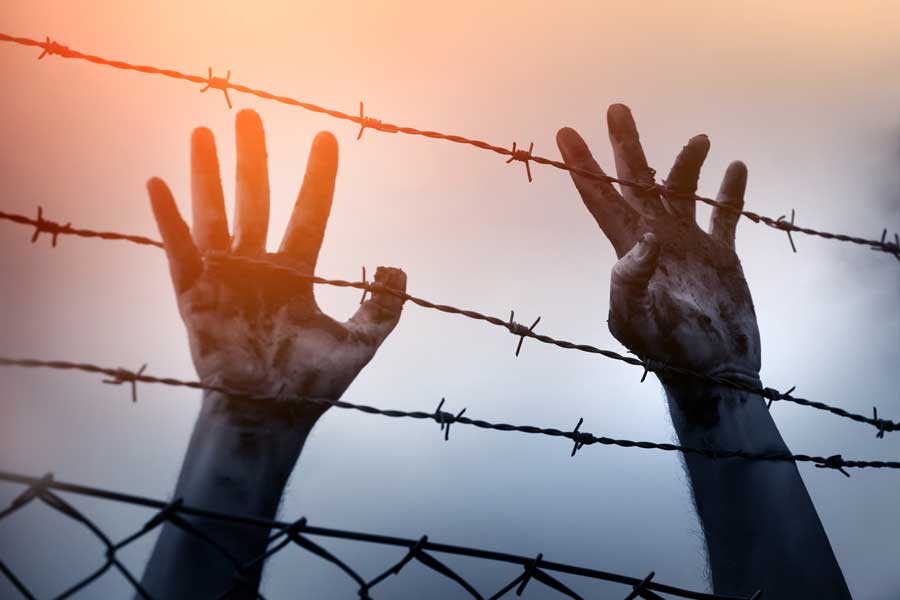 I was just about to turn in for the night when I thought I should check on my emails.  In the list of unopened items, one message screamed out at me.  It said “More interviews…”

And it came from my colleague at Christian Solidarity Worldwide who was in Ethiopia visiting an Eritrean refugee camp poised on the precarious boarders between the two nations.  One story told of a 26-year-old man who became a Christian at the age of 14 and who had subsequently been imprisoned for his faith.  He was arrested when police stormed into his home group, and tortured for 3 days.   A second man was denounced as a Pentecostal, tied up and abandoned in a desert storm for a full day.  He escaped near death when the driver of an army vehicle was alerted that he was about to run over him in the sand.

Sadly, stories like these are not uncommon.  From Nigeria to North Korea and Burma Bangladesh, an estimated 100 million Christians are persecuted for believing in Jesus and practising their faith.   Persecution takes many forms from discrimination in employment or education, to vandalism, disappearances, mutilation or death.  It may be instigated by nationalism, religious bigotry, ideological conflict, as North Korea, or complex skirmishes over land or heritage. All too often, governments who have a principle responsibility to protect religious freedom instigate and perpetuate the injury and death of Christian believers.

Stories of persecution from around the world reminds us that the claims of the Gospel can still be offensive – even when accompanied by good deeds.

But it is also a reminder that persecution and the loss of civil liberties are rampant across the world.   According to the Pew Foundation, 75% of the world’s population experience some degree of religious freedom violation.  And whilst a significant proportion of these are Christian brothers and sisters, persecution and religious freedom violations are by no means limited to Christians in Pakistan or North Korea.

This raises life and death question for Christian faith.  As we worship, work and go about our Christian witness, how should we respond to such catastrophic realities?

Certainly, we should be praying for parts of the Christian family experiencing persecution. That it the privilege and opportunity we have.  Clearly, as we stand in empathy with other parts of the body (1 Cor.12: 26; Heb. 13:3) we will be anxious to intercede on their behalf.  Even Paul, the Christian icon of endurance was constantly asking for prayer (Rom. 15:30; Eph. 6:19; Phil. 1:19; Col. 4:3).

But our praying was never meant to be sufficient.  No Christian who suffered for their faith in the first 300 years of the Church’s life had what we have today:  binding humanitarian and universally agreed laws which protect freedom to love God and follow Christ.  Lest we think that our global human rights conventions came exclusively from the overflow of a secular, anti-Christian worldview, we should remember that a thousand years of Christian thinking, and teaching helped shape our modern concepts of justice and our understanding of freedom. Christians worked tirelessly to construct Article 18 of the 1948 Universal Declaration of Human Rights (UDHR) and subsequent universal conventions for civil, cultural and political freedoms.

Anyone who has met Christians either in, or emerging from the flames of persecution, will know that feeling of being in the presence of a living saint.   Almost without exception, their tenacious faith and overwhelming joy in the face of death is evidence of an unstoppable church.   Their testimony makes sense of words from the 4th century North African church Father, Tertullian who said that the blood of the saints is the seed of the church.

But Tertullian never intended to mute our voice of protest.  Church history and the brutal situation in Syria and the Middle East today is a reminder that the Christian presence really can be depleted and decimated by persecution.  In the words of a colleague, Christians expect persecution, but we  don’t necessarily accept it.

In responding to those who are persecuted, we have the awesome privilege of drawing strength and inspiration from the wellsprings of their suffering, but we should never allow their faith to degenerate into fearsome loneliness.   Their story of persecution is a poignant reminder that our spirit-filled prayers of faith should always be accompanied by prophetic protest that honors the energies of Christians who thought and fought for freedom.

Increasingly, those of us who live in the ‘global north’ are experiencing shades of marginalisation as we seek to protect freedom of thought, conscience and belief in the public sphere.   The encroachment of our formerly assumed freedoms should energise us to stand in solidarity with those - like our brothers and sisters in Eritrea – whose experiences are often brutal in comparison to our own.

But we also have a responsibility to see our persecuted brothers and sisters in a wider context. Clearly, the persecution of Christians should be of utmost importance to Christians.  We have a responsibility to suffer with the body of Christ (1 Cor. 12:26; Gal. 6:10) and our commitment to care for members of the ‘family’ is in itself a witness to the fact that we are disciples of Christ (John 13:34,35; Rom.12:10; 13:8 1 Thess. 4:9). In any event, no one understands the needs of a Christian as well as another member of the family and undoubtedly, Christian human rights activists bring a fellow-ship factor to their work which is not available from secular organisations.

But true freedom is a continuum:  it embraces the idea that all people are made in the image and likeness of God (Gen 1:26, 27) with a dignity expressed in the freedom to chose.  The freedom of thought conscience and belief has therefore rightly been regarded as an indivisible freedom of the person.  In the United States, the ‘baptistic’ ideal of freedom to believe without coercion from the State has therefore come to be regarded as the first freedom.   From a Christian point of view, disregarding this freedom is an attack against the image of God.  As theologian, Nicholas Walterstorff suggests, “To torture a human being is to torture a creature whose nature he or she shares with the Second Person of the Trinity.”

The freedom to believe is not the exclusive right of Christians and in our uncompromising advocacy for Christian freedom, our witness about God, and his relationship with everyone made in his image, will become neutralised if we present ourselves as partisan liberators.  It is impossible to understand God’s response to human suffering as a tribal affair, for beyond God’s specific concern for Israel’s liberation (Exod. 3:6-10; Isa 61:1-9) it is abundantly clear that God presents himself as a universal liberator (Isa 58: 6-9; 61: Mic. 6:8; Luke 4:16-20).

Rev. Dr. Joel Edwards is the Strategic Advisor with Christian Solidarity Worldwide (www.csw.org.uk), an agency working for religious freedom and human rights. He is also a freelance broadcaster with the BBC, and a writer and international speaker on a wide range of areas including Bible teaching, justice, leadership, faith response to human rights, religious freedom, and current affairs. He is married to Carol, and they have two children and five grandchildren.

Pray with us  for revival